Knowing when to try for a baby is crucial in successful conception.

Knowing when to try for a baby is crucial in successful conception. For mothers-to-be, this means that understanding and working along with their natural fertility cycle will be one of the best ways to increase their chances of successfully starting a family. Tracking this cycle may take a little work, but by understanding what is occurring within her body, a mother-to-be might have a better chance of timing intercourse with ovulation to optimize chances of conception.

Ovulation occurs when an egg matures and is released from the ovary; it then travels down the Fallopian tubes and wait to be fertilized. An egg is only viable for 12-24 hours after it is released, which is why timing really is everything when it comes to conception. The uterine lining becomes thicker in preparation for implantation, if the egg is fertilized. If the egg does not become fertilized conception does not occur and the uterine lining will shed (menstruation). This natural cycle begins all over again beginning with menstruation, marking the beginning of the next cycle. Timing is such a key part of conception, monitoring her cycle and tracking ovulation can help identify the best time to try.

To optimize your window of ovulation each month, it is recommended to use one Stork OTC on each of the most fertile days of the female’s menstrual cycle, when ovulation is occurring or just about to occur. We recommend tracking ovulation with an ovulation test /monitor prior to using The Stork OTC. 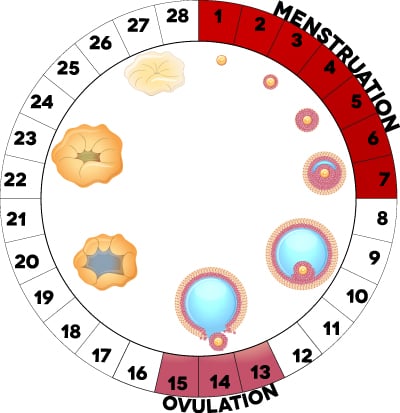 How Much Do You Know About Ovulation

How much do you know about ovulation?

Ovulation is a tricky topic but it’s also an important one - especially when you are trying to conceive. When you’re ready to make a baby, it’s likely that you’ll be checking for ovulation so you know exactly when it’s prime time to get to work. Take this quiz to find out just how much you know about ovulation.

When does ovulation occur in an average 28-day cycle?

How long does an egg live once it is released?

Women are not born with eggs inside them but develop them once they reach their menarche (start of their period).

What does the most fertile type of cervical mucus look like?

When does implantation of a fertilized egg normally take place?

Can you get pregnant if you have sex prior a few days prior to ovulation?

Which of these is not a cervical indicator of ovulation?

Which hormone triggers the release of an egg during ovulation?

Hormonal birth control does what to your ovulation?

You’ve got some studying to do but don’t feel bad. Most women are not familiar with the facts about ovulation. Taking some time to learn about this process can help you feel more prepared when you’re trying to conceive.

You know quite a bit about ovulation but brushing up wouldn’t hurt, either. The more you know about your body and the way it works, the better chance you have of conceiving when you’re ready.

When it comes to ovulation, you’re ahead of the pack. Because of it’s confusing nature, many women are unclear about what happens to their bodies before, during, and after ovulation. But you? You’ve got this.

Despite being an often confusing topic, you know what you’re talking about when it comes to ovulation. Knowing all the facts can help you become better acquainted with your body’s unique ovulation patterns and can help you conceive when you’re ready.

Understanding your menstrual cycle can be one of the most confusing things you’ll ever do. It’s also one of the most powerful, especially when it comes to trying to conceive. When you understand how and why your body does the things it does, you’ll be better equipped to make choices that will support your journey towards starting a family, put you in control of your reproductive health, and make the whole process less perplexing. Ovulation is just one part of your cycle but it’s a crucial one that your ability to get pregnant hinges on. If you’re actively trying to conceive, then it’s likely that you are already checking your ovulation signs to optimize the best time for intercourse or insemination. Understanding the signs of ovulation can help you become more aware of what to look for and when to start the conception process.

What exactly is ovulation?

Before looking at the signs of ovulation, let’s explore a little more about what ovulation is. Simply put, it’s the phase of the menstrual cycle in which your ovaries develop follicles that each contain an egg. The strongest follicle discharges an egg, which then travels down your fallopian tube. If it is met by sperm, it may become fertilized, starting the first stages of conception. (Note: the implantation of the fertilized egg doesn’t happen right away. This usually takes place between 6 and 12 days after ovulation). If it’s not fertilized, it will disintegrate and be absorbed into your uterine lining, which will begin to shed and you’ll start your period.

When do you ovulate?

This question, unfortunately, can be a challenging one. Your ovulation date is determined by the length of your cycle and, because every woman’s body is different, there is no set answer. We do know that ovulation typically occurs between 12 and 16 days before the start of your next period. So, if you have an average cycle length of 28 days, you’ll likely ovulate midway through, on the 14th day. If you have a shorter, 21-day cycle, you may ovulate between the 6th and 10th days of your cycle. Because of this, it’s helpful to track your ovulation and become familiar with your own ovulation patterns.

Some women can feel themselves ovulating. Not quite like cramps, it’s usually a dull ache on one side of the lower abdomen or the other, but not both. It should only last between a few minutes and a few hours and can be treated with an over-the-counter medication like Motrin. However, it’s important to note that if the pain is severe and doesn’t go away with a mild painkiller, it’s worth talking to your doctor about so you can rule out endometriosis or ovarian cysts. Some women experience light spotting that accompanies the pain during ovulation.

Cervical mucus is one of the best (and easiest) ways to track your ovulation and is worth getting acquainted with. As hormones fluctuate throughout your cycle, the appearance, texture, and consistency of your cervical mucus changes. There are different types of mucus for different levels of fertility and, for the sake of recognizing when you’re ovulating, some signs that your mucus is fertile are:

The most fertile type of cervical mucus is often referred to as egg-white cervical mucus (EWCM) due to its resemblance of a raw egg white. This mucus is stretchy and, if you were to stretch it between your thumb and index finger, would not lose its shape. This helps to protect the sperm as it travels to the egg and provides alkaline protection from the acidity of the vagina.

You can check your cervical mucus a few different ways, depending on what’s most comfortable for you.

Once you have the mucus, you can observe its appearance, texture, and consistency to determine whether you may be ovulating.

To check your cervix, try standing in the position you would to insert a tampon and using your fingers to gently feel inside. The location of your cervix changes so it may take a few cycles to get familiar with the process, but it can provide valuable insight about when you should try to conceive.

While there are other signs of ovulation such as breast tenderness, increased libido and energy, heightened sense of smell, and spotting that can clue you into when you are fertile, they can be affected by so many other factors that they don’t make predictable signs. You may find yourself noting every little change in your body when you are trying to conceive but focusing on these proven signs of ovulation, paired with an ovulation prediction or calculator, can take some of the stress away and help you become more familiar with your body in the process.

USE OUR OVULATION CALCULATOR HERE

How to Track Ovulation

Using an ovulation test or natural family planning methods will help you to become more familiar with when you are most fertile during the month. You can use our ovulation calculator here to help you begin to track your monthly cycle based on the first date of your last menstrual period.

Read our Top Tips for Getting Pregnant Here