Developing Follicles: The Path to Ovulation

If you’re trying for a baby, you’re probably already used to tracking your ovulation date. You know that you have the best chance to get pregnant when you plan around this important time. But have you ever wondered how your body gets ready to release an egg right on schedule? It starts in the follicles.

On average, a woman’s ovaries contain about 400,000 follicles at the start of puberty. Each follicle is a collection of cells including a single immature egg cell, or oocyte. Over a woman’s life, only a small fraction of these follicles will mature to the point where they can release their eggs. It’s this journey we’re interested in exploring!

The Stages of the Follicles

At any given time, many follicles will be in different stages of development, so that each month, one will be ready to release its egg during ovulation. Each follicle develops through several stages, growing and maturing along the way.

What Happens During Ovulation?

During ovulation, the egg leaves the follicle and moves into the fallopian tube. As the egg is carried away, the follicle folds in on itself and becomes the corpus luteum. This structure releases hormones that thicken the uterine lining - the endometrium - and prepare the uterus for the fertilized egg. If the egg isn’t fertilized, of course, the endometrium and the empty follicle are excreted during menstruation.

This entire process has one crucial goal: to release a healthy egg ready for fertilization. Many follicles develop together, but in almost every case, only one will make it through the entire process to ovulation.

To have the best chance of getting pregnant, you want to understand as much as you can about the process of ovulation. The development of follicles is an important part of that process, but if you want to learn more, we’ve assembled a page that has answers to common questions plus a quiz to test your knowledge as you learn. 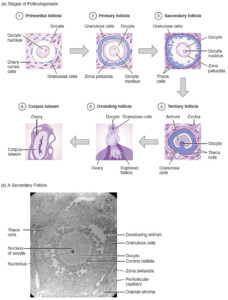 Stages of the Follicles | Credit: Wikimedia